In accordance with previous AGM resolution, the Chairman of the Board has convened a Nomination Committee after consultation with the company’s three largest shareholders in terms of votes.

The Nomination Committee appointed for the 2023 Annual General Meeting in Svedbergs i Dalstorp AB (publ), consists of the following members:

In total, the Nomination Committee represents 66.6 percent of the votes for all shares in the company, based on the ownership structure on 31 August, 2022.

The Nomination Committee’s proposal will be presented in the notice to the Annual General Meeting which will take place on 27 April 2023, and on the company’s website.

Shareholders who wish to submit proposals to the Nomination Committee may contact the Chairman of the Board Anders Wassberg. Please note that the deadline for submitting proposals is 28 February 2023.

Svedbergs Group operates in the Nordic region and in the UK. The Group’s companies develop, design, and sell bathroom furniture and related products. Under the motto collaboration without confusion, the Group’s companies continuously develop their product range for the entire bathroom. Through close cooperation with partners, the consumer’s desires are satisfied. The Group operates under the brands Svedbergs, Macro Design, Cassøe, Roper Rhodes, Tavistock and R2. The parent company Svedbergs i Dalstorp AB conducts its operations in Dalstorp outside of Ulricehamn and its subsidiary companies Macro Design in Laholm, Cassøe A/S in Herning Denmark and Roper Rhodes, including Tavistock and R2, in Bath, England. 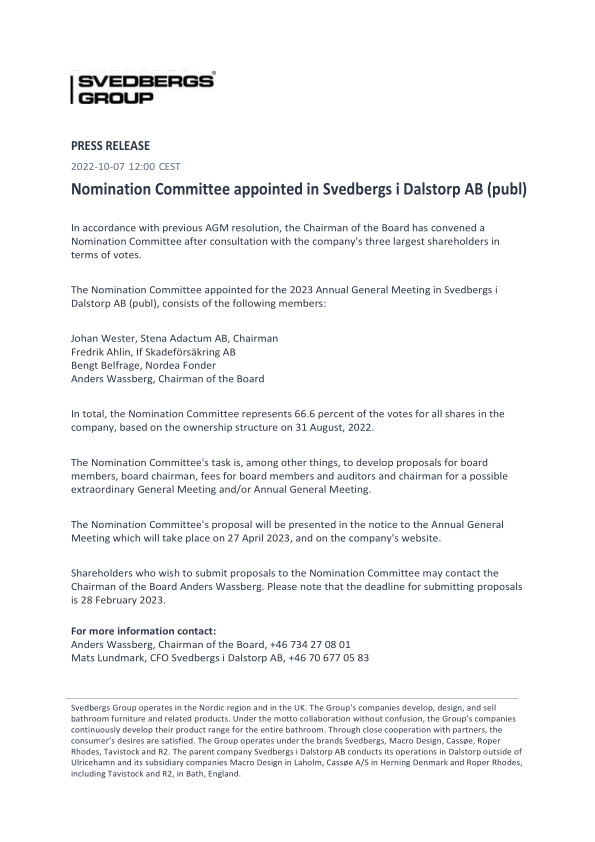