This statement is made by the independent bid committee of the Board of Directors of Svedbergs in accordance with Nasdaq Stockholm’s Takeover Rules (“Takeover Rules”).

On 22 March 2022, Stena Adactum submitted a public offer to the shareholders in Svedbergs to transfer all of their shares in Svedbergs to Stena Adactum for SEK 50 per share in cash (the “Offer”) and intends to publish an offer document regarding the Offer on 1 April 2022. The Offer applies to B shares[3] in Svedbergs, which are admitted to trading on Nasdaq Stockholm.

The price per B share in the Offer represents[6]:

The completion of the Offer is conditional upon the receipt of all necessary approvals from the relevant competition authorities being obtained, in each case on terms which, in Stena Adactum’s opinion, are acceptable. Stena Adactum reserves the right to waive, in whole or in part, the condition set out above in accordance with applicable laws, rules and regulations. The Offer is not subject to any financing conditions. Stena Adactum will finance the Offer with existing funds, available bank financing and by funds provided by Stena AB.

For further information about the Offer, please refer to https://svedbergsbudplikt.se/en/.

The Board of Directors of Svedbergs has instructed the independent Board members Leif Dahl, Susanne Lithander, Ingrid Osmundsen, Jan Svensson, Kristoffer Väliharju and Anna Westin to form an independent bid committee to deal with, and resolve on, matters concerning the Offer that would normally have been dealt with by the Board of Directors as a whole. The Chairman of the Board of Svedbergs, Anders Wassberg, in his capacity as CEO and President of Stena Adactum, is not part of the bid committee, nor has Joachim Frykberg, who holds another Board assignment within the Stena Adactum Group, participated in any processing, or decision on, matters related to the Offer.

Given that Svedberg's Chairman of the Board Anders Wassberg is also the CEO and President of Stena Adactum, Section III of the Takeover Rules is applicable on the Offer. The independent bid committee has therefore, in accordance with Rule III.3 of the Takeover Rules, requested a Fairness Opinion from Pareto Bank. The Fairness Opinion is attached to this statement. Pareto Bank receives a fixed fee for providing the Fairness Opinion which is not contingent upon the size of the Offer consideration, the acceptance level of the Offer or whether it is completed.

Impact on the Company and its employees

Under the Takeover Rules, the independent bid committee is required, on the basis of Stena Adactum’s statement in the press release announcing the Offer, to present its opinion regarding the impact that  implementation of the Offer will have on the Company, particularly om terms of employment, and its opinion regarding Stena Adactum’s strategic plans for the Company and the effects it is anticipated that such plans will have on employment and on the locations where the Company conducts its operations.

In its press release, Stena Adactum stated the following:

“Stena Adactum has been a shareholder in Svedbergs since 2016 and has through its entire ownership supported Svedbergs’ increased focus on profitable growth through both organic and acquired expansion. Stena Adactum is positive of Svedbergs’ outlook for continued progress and thereby supports the initiatives being implemented for increased total returns to the shareholders.

Stena Adactum is a long-term owner, which creates conditions to support long-term strategic initiatives so that the companies Stena Adactum invests in can reach their full potential. Through the Offer, Stena Adactum sees an opportunity to continue to invest in a quality company and as an active owner develop and strengthen Svedbergs’ operations.

Stena Adactum’s plans for the future business and general strategy does not currently include any material changes with regard to Svedbergs’ operational sites, or Svedbergs’ and Stena Adactum’s management and employees, including their terms of employment.”

The independent bid committee assumes that this description is accurate and has for relevant purposes no reason to adopt a different opinion.

The independent bid committee’s statement on the Offer

In evaluating the Offer, the independent bid committee has considered both the long-term growth prospects for the Company described above, as well as the challenges associated with an active acquisition strategy and the market prospects for the Company's operations and base its opinion on an overall assessment of a number of factors that the independent bid committee has considered relevant when evaluating the Offer. These factors include, but are not limited to, the Company’s strategic options given its operational and financial prerequisites as well as prevailing market conditions and challenges in each market in which the Company operates, the Company's expected future development and related opportunities and risks.

The independent bid committee has analyzed the Offer using the methods normally used for evaluating public offers for listed companies, including Svedbergs’ valuation in relation to comparable listed companies and comparable transactions, premiums in previous public offers, the stock market’s expectations in respect of Svedbergs and the independent bid committee’s view on Svedbergs long-term value based on expected future cash flows. In relation to the premiums described above, the independent bid committee has also taken into account that the subscription period in the recently completed rights issue ended on 8 March 2022, i.e. shortly before Stena Adactum on 14 March 2022 announced that they own more than 30 percent of the shares and votes in Svedbergs and informed the market that they intend to announce a mandatory public offer for the remaining shares at a price of SEK 50 per share. The independent bid committee considers that these described circumstances entails that the premiums described above, in relation to the closing share price and volume-weighted average trading price, 11 March 2022 and 21 March 2022, respectively, do not give a fully accurate picture.

Having concluded this assessment, the independent bid committee believes that the terms of the Offer does not recognize Svedbergs’ long-term growth prospects. The assessment is also based on the Fairness Opinion from Pareto Bank regarding the fairness of the Offer from a financial perspective for the shareholders of Svedbergs. According to the Fairness Opinion, Pareto Bank is of the opinion that the Offer, subject to the conditions and assumptions set forth in the statement, is not fair from a financial perspective to the shareholders in Svedbergs.

In view of the above, the independent bid committee unanimously recommends Svedbergs’ shareholders to not accept the Offer.

However, the independent bid committee believes that the interest shown by the main owner Stena Adactum to increase its holding in the Company and its willingness to contribute to the Company’s continued development through its industrial experience and financial strength is positive for the Company.

The information in this document is such that Svedbergs i Dalstorp AB (publ) is obliged to make public pursuant to the EU Market Abuse Regulation. This information was submitted for publication, through the agency of the contact person set out above, at 6.00 p.m. CEST on 29 March 2022.

[2] Calculated to include any treasury shares held by Svedbergs (as per the day of the announcement of the obligation to launch a mandatory public offer 14,361 B shares) and including 14,123,758 B shares issued as part of the rights issue announced by Svedbergs on 11 February 2022, whereof 4,342,375 B shares have been subscribed and allotted to, directly and indirectly, Stena Adactum.

[3] All issued shares in Svedbergs are B shares.

[4] Including 14,123,758 B shares issued as part of the rights issue announced by Svedbergs on 11 February 2022, whereof 4,342,375 B shares have been subscribed and allotted to, directly and indirectly, Stena Adactum.

[5] Including 14,123,758 B shares issued as part of the rights issue announced by Svedbergs on 11 February 2022, whereof 4,342,375 B shares have been subscribed and allotted to, directly and indirectly, Stena Adactum. 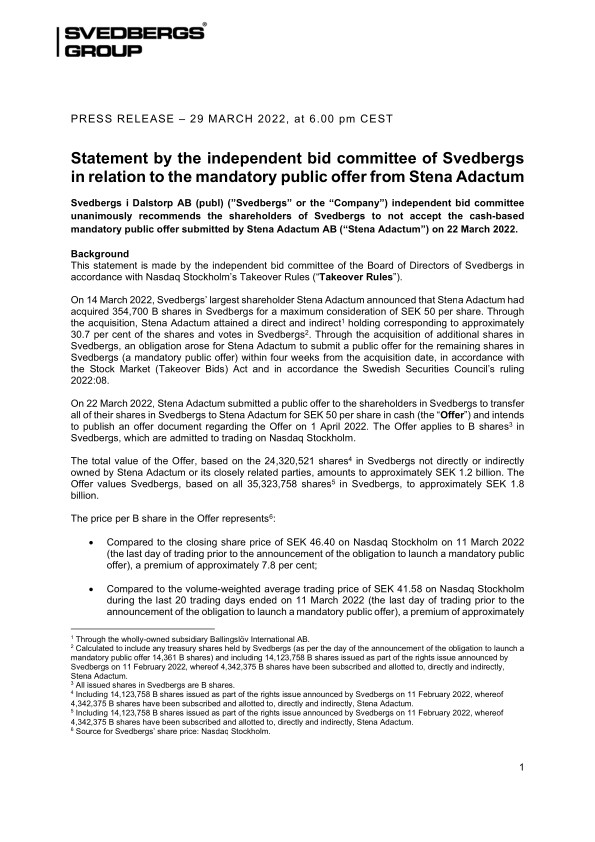