As a result of the rights issue, Svedbergs will receive net issue proceeds of approximately SEK 477 million, which will be used in its entirety to repay part of one of Svedbergs’ bridge loan facilities of SEK 500 million, which was raised in connection with the acquisition of Roper Rhodes Ltd.

“We are proud and grateful for the strong support shown for our rights issue, particularly given the current turbulent and volatile market conditions. With the issue proceeds, we ensure an optimal capital structure and partially finance our strategic acquisition of Roper Rhodes in the United Kingdom. We are now continuing the work towards becoming a leading bathroom supplier in selected markets in Europe with four strong branded companies and opportunities for additional acquisitions that match our high ambitions.”

For those who have subscribed for shares with subscription rights and thus have received paid subscribed shares (Sw. betalda tecknade aktier (”BTA”)), the last day for trading in BTAs will be 15 March 2022. When the increase in share capital has been registered with the Swedish Companies Registration Office, the BTAs will be converted into new shares. The new shares subscribed for with subscription rights are expected to start trading on Nasdaq Stockholm around 24 March 2022.

The information in this press release does not contain or constitute an offer to acquire, subscribe or otherwise trade in shares, subscription rights or other securities in Svedbergs in any jurisdiction. Any invitation to the persons concerned to subscribe for shares in Svedbergs has only taken place through the prospectus published by Svedbergs on 16 February 2022. 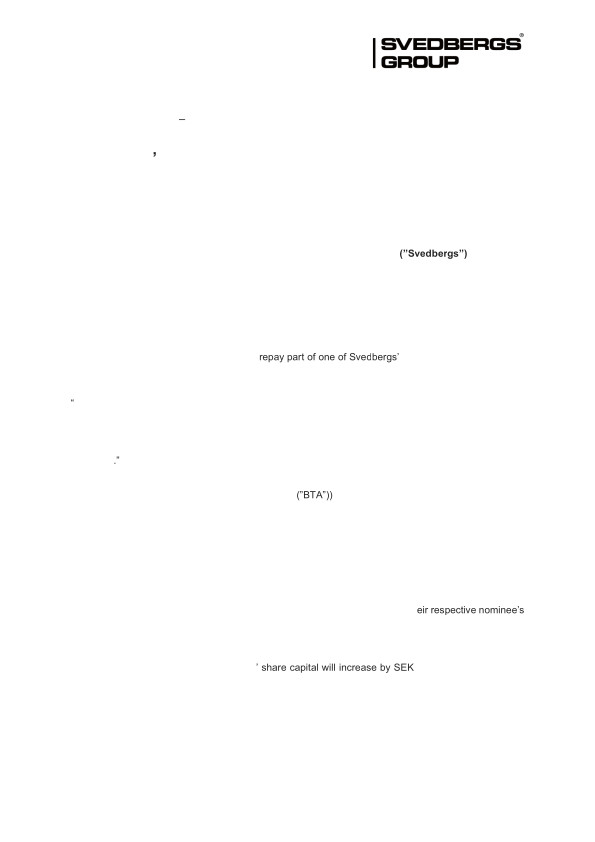