The Board of Directors of Svedbergs i Dalstorp AB (publ) (“Svedbergs”) has, based on the authorization from the Extraordinary General Meeting on 27 December 2021, resolved to launch a new share issue with preferential right for existing shareholders of approximately SEK 494 million in order to secure an optimal capital structure by repaying part of the bridge facilities which, together with increased credit facilities, were used to finance the acquisition of Roper Rhodes Ltd (”Roper Rhodes”), which was announced by Svedbergs on 1 December 2021. Today, Svedbergs announces the terms and conditions of the rights issue.

The rights issue in brief[1]

Background and rationale for the rights issue

On 1 December 2021, it was announced that Svedbergs had entered into an agreement to acquire Roper Rhodes, a well-established supplier and designer of bathroom furniture and products in the United Kingdom. The fixed consideration has amounted to approximately GBP 82 million, based on an agreed enterprise value of GBP 76 million, on a cash and debt free basis, and a net receivable in the acquired company of approximately GBP 6 million. In addition, an earn-out has been agreed which has been recorded at GBP 12 million, corresponding to fair value, and which will be paid 2025 depending on Roper Rhodes financial performance. With the acquisition, Svedbergs has established a strong market position in the United Kingdom and has made an important step toward the vision of becoming the leading bathroom supplier in selected markets in Europe.

In order to meet the liquidity needs of the combined operations of Svedbergs and Roper Rhodes and to finance the acquisition of Roper Rhodes, Svedbergs increased its credit facilities by SEK 400 million and secured two bridge facilities of SEK 620 million in aggregate. The rights issue with preferential rights for existing shareholders is carried out to secure an optimal capital structure as part of the repayment of the bridge facilities.

Existing shareholders who choose not to participate in the rights issue will have their ownership diluted by approximately 40 percent, but are able to financially compensate for this dilution by selling their subscription rights. Unexercised subscription rights must be sold in order not to lapse without value.

Complete terms and conditions for the rights issue and information about Svedbergs will be included in the prospectus that is intended to be published around 16 February 2022.

Indicative timetable for the rights issue

This information is information that Svedbergs i Dalstorp AB (publ) is obliged to make public pursuant to the EU Market Abuse Regulation. The information was submitted for publication, through the agency of the contact persons set out above, at 13:00 CET on 11 February 2022.

The information in this press release does not contain or constitute an offer to acquire, subscribe or otherwise trade in shares, subscription rights or other securities in Svedbergs in any jurisdiction. Any invitation to the persons concerned to subscribe for shares in Svedbergs will only be made through the prospectus that Svedbergs estimates to publish on 16 February 2022.

[1] The stated holdings are calculated as of 31 January 2022 including known changes thereafter, with consideration for Svedbergs’ holdings of 14,361 treasury shares which do not entitle to participate in the rights issue. 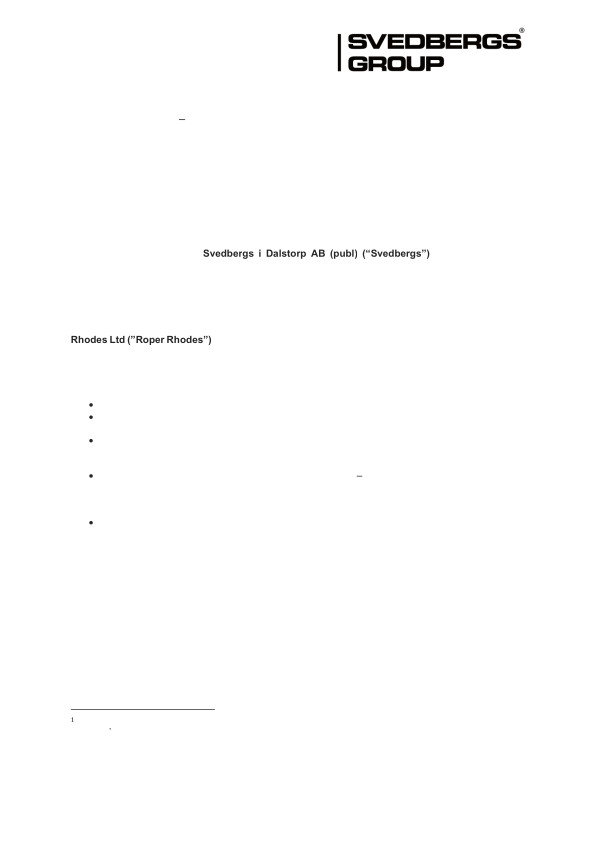